Cérévia, the commercial arm of 7 cooperative groups across 3 regions (Bourgogne, Franche-Comté and Rhone-Alpes) and Europorte, the rail freight subsidiary of Groupe Eurotunnel today celebrate the 1,000th train between the Burgundian hub at Venarey-les-Laumes and the Tellines’site at Port-Saint-Louis (Port de Marseille –Fos).

This 1,000th train is symbolic of the successful and rewarding partnership put in place in 2009. Europorte was able to bring its skills in railway logistics to add competitiveness to the commercial grouping. More than 45% of Cérévia’s production goes for export (1.7 mt) of which two thirds to the Mediterranean basin via Port-Saint-Louis (1.1mt).

Europorte’s commitment to Cérévia’s business can be seen from the regularity and reliability of transport services since 2009 and through the development by the partnership of a proposition that brings high level of flexibility.

Depending on Cérévia production this can lead to two trains out of six each week being transferred to ports on the Rhine and the Moselle (the Flexi-east option). Additionally, Europorte has brought Cérévia new, higher capacity, simplified operation wagons.

The five year partnership between the cooperative grouping and the railway logistics specialist has enabled the transport to be strengthened and rendered more adaptable to changes in demand from Cérévia customers.

The other key route to Port-Saint-Louis is water (515,000 tonnes are delivered by barge for Cérévia to Tellines’ site per campaign). Based on the model partnership with Europorte, Cérévia announced on 15 May the forthcoming multi year contract with the river hauliers, which will guarantee a volume of transport in return for a guarantee of barge availability, to work in harness with the rail route.

The Europorte-Cérévia partnership in numbers:

The celebration of the 1,000th train was attended by more than 100 guests at Port-Saint-Louis. The ribbon was cut by Chairman of SEPT (Société d’Exploitation du Port des Tellines) and Cérévia Director, Robert Bilbot, Didier Laurency, Chairman of Cérévia, Pascal Sainson, Chairman of Europorte SA and Christine Cabau-Woehrel, President of the Executive Board of the Grand Port Maritime de Marseille.

Pascal Sainson, Chairman of Europorte SA: “We are particularly happy with this collaboration with Cérévia, it is recognition of the professionalism of our teams, who deliver reliable and punctual freight trains and of the quality of the services we provide.”

Didier Laurency, Chairman of Cérévia: “The access to the Mediterranean needed a proper structure put in place by the grain producers. This is now done. This business is a great success thanks to the cooperatives but also thanks to the partnerships with operators such as Europorte.”

Robert Bilbot, Cérévia Director and Chairman of SEPT: “The 25,000 farmers members of the Cérévia cooperative need to be able to benefit from exporting between 45 and 50% of their grain each season. With Europorte, along with water-based transport, we have built a reliable and efficient rail logistics chain, thereby guaranteeing our access to and competitiveness on the export market.”

Christine Cabau-Woehrel, President of the Executive Board of the Grand Port Maritime of Marseille: “This is a very successful example of integrated logistics which enables almost 100% massified transport, the 1,000th train is a sign that the rail transport, which will be further enhanced by the new link, is particularly suitable for high-performance industrial partnerships.” 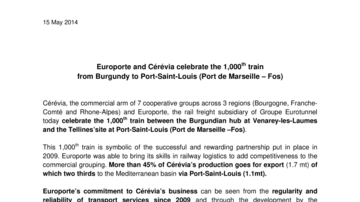