Due to the proposed closure of the Euronext London regulated market[1] by Euronext, Getlink ordinary shares will no longer be admitted to trading on a UK regulated market, which is a condition for the admission to listing on the London Official List. As a consequence, an application has been made by Getlink to the FCA (Financial Conduct Authority) to cancel the standard secondary listing of the ordinary shares on the London Official List, with effect from 7.00 a.m. (London time) on 26 June 2020.

Getlink currently has a standard listing for the ordinary shares on the Official List in London. The primary listing is with the Autorité des Marchés Financiers (AMF) in Paris. The Paris listing will be maintained without any change. The CDI trading process will remain unchanged for CDI holders. 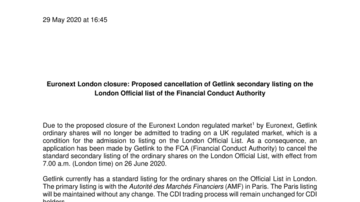