Eurotunnel and the Railways (SNCF and British Railways Board) have reached an agreement bringing an end to the dispute, started in 2001, regarding the calculation of their contribution to the Channel Tunnel operating costs.

This dispute had led to an application before an Arbitral Tribunal that decided upon the financial years 1997 to 2002, and subsequently to a first, partial, agreement between Eurotunnel and the Railways in December 2005 in relation to the years 1999 to 2004.

The current agreement is definitive and brings to an end the various disputes concerning operating costs. It confirms the agreement relating to the years up to 2004, settles the 2005 financial year and sets out a lump sum mechanism for the majority of operating costs for each of the years from 2006 to 2014 inclusive. Consultation mechanisms have also been put in place in order to determine the contribution of the Railways to renewal investments that concern them.

These measures allow the Railways to participate in the savings made by Eurotunnel with respect to its railway costs (excluding Shuttles).

“It was regrettable that Eurotunnel had had a dispute with its principal customer for nearly 10 years and it was therefore necessary to turn that page. This agreement restores a favourable climate for better cooperation between the Railways and Eurotunnel”. 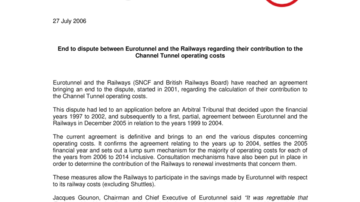