Following the retirement of Claude Lienard, Deputy Chief Executive officer responsible for Corporate Services, Emmanuel Moulin will take over this role starting from 28 August 2012. Emmanuel Moulin is 44 years old and an alumnus of the Ecole Nationale de l’Administration (ENA). He has further qualifications from IEP, Paris and ESSEC.

Starting his career in the Transport Department of the French Treasury in 1996, Emmanuel Moulin moved to the office of Treasury and Monetary policy in 1998, before taking up the role of Deputy Director at the World Bank in Washington in 2000. Between 2003 and 2005 he was Secretary General of the Club de Paris before joining Citigroup Global Markets in 2006 with responsibility for France and Belgium. In 2007 he was appointed Deputy Director in the office of the French Minister for the Economy, Christine Lagarde, before taking on the role of economic advisor to the President of France between 2009 and 2012. 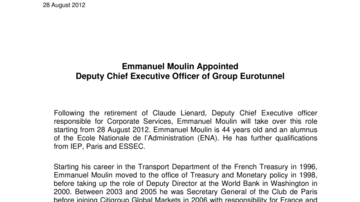