In this evolution which will further enhance the group’s corporate governance, he will report to Jacques Gounon, Chairman and Chief Executive Officer. Michel Boudoussier, Chief Operating Officer with responsibility for the Concession and Pascal Sainson, Chief Operating Officer with responsibility for rail freight, will continue to direct activity in their respective areas, under the control of Emmanuel Moulin.

Emmanuel Moulin started his career in the French Treasury Department between 1996 and 1998, before moving to the office for Monetary Policy from 1998 to 2000. He was subsequently appointed as a deputy director in the World Bank in Washington. He was Secretary General of the Club de Paris from 2003 to 2005 and then joined Citigroup Global Markets in 2006 with responsibility for public service banking in France and Belgium. In 2007 he was appointed deputy director in the office of Christine Lagarde, Minister for the Economy, Finance and Industry, in France, before taking up the role of Economic Advisor to the President of the Republic between 2009 and 2012. He joined Groupe Eurotunnel SA in August 2012. 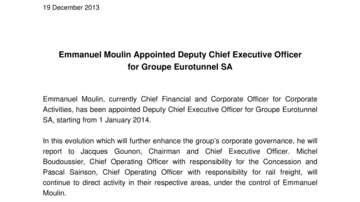