ElecLink: The Intergovernmental Commission and the national safety authorities give the go-ahead

Getlink has today obtained approval from the Intergovernmental Commission (IGC) for its safety management system, guaranteeing the compatibility of the electricity interconnector with the railway system.

This decisive step in the implementation of the ElecLink interconnector, follows the success of the cable electrification tests which were carried out at the end of the summer in collaboration with specialist companies, Siemens and Eurailtest. At the same time, Eurotunnel has adapted its operating and maintenance procedures, enabling the next phase of the project, the transfer of electricity between RTE and National Grid to commence before the entry into service planned for mid-2022.

Recognised as a Project of Common Interest by the European Commission, ElecLink provides an exchange capacity of 1 GW between France and the United Kingdom, the electricity consumption equivalent of 1.65 million households. The only electrical interconnector between France and the United Kingdom using previously existing infrastructure and without any interaction with the marine ecosystem, ElecLink helps to balance French and British energy supplies and to accelerate energy transition commitments by European countries.

Yann Leriche, CEO of Getlink said: "The authorisation granted by the IGC, and the  safety authorities is the culmination of many years of work and the fruit of an active collaboration between the various parties working on the project. We are proud to have obtained this authorisation, especially for all the teams who have committed so much to the project and look forward to commissioning the interconnector later this year.” 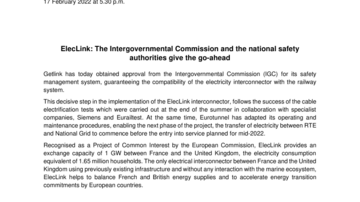 ElecLink: The Intergovernmental Commission and the national safety authorities give the go-ahead