ElecLink: IGC approves start of tests at the converter stations

Today, Getlink announced a new step in the deployment of the ElecLink interconnector. On 7 October, the Intergovernmental Commission (IGC) issued a favourable opinion on establishing static tests on the converter stations.

After having studied the technical reports provided by Eurotunnel and following the opinion of external experts, the IGC has given consent to carrying out connection tests at the two converter stations: to the RTE network on the French side and the National Grid on the British side, according to established protocols and following site visits with the emergency services. The testing phase will begin in the coming days.

When ElecLink enters service in mid-2022, the interconnector will provide a major contribution to the European transition to green energy. To complete this Project of Common Interest, as established by the European Commission, the Group had invested €503 million in external construction costs[1] by the end of 2019, with the amount remaining being €162 million.[2]

Yann Leriche, Chief Executive Officer of Getlink, said: “Safety is an absolute priority for us and today we take an important step in this project with the approval of the IGC and the Channel Tunnel Safety Authority. We will progressively add voltage to our converter stations and connect them to national networks. All stakeholders in the project are currently working closely together with a common goal, to take the next step by the end of the year.”

ElecLink is an electrical interconnector with a capacity of 1GW, using existing infrastructure and without any interaction with marine life, which will provide power to more than 1.6 million homes. This installation will increase the capacity for electrical exchanges between the UK and France by 50%, thus strengthening and securing cross-Channel electricity exchanges, and accelerating the energy transition initiated by European countries. In keeping with prospects opened up by COP21, the project has received the support of the British and French governments and has been recognised by the European Commission as a Project of Common Interest. ElecLink, together with IFA 2000, is the most advanced interconnector project in existence today; the others having faced difficulties in obtaining security approvals and other authorisations. The economic interest in ElecLink was highlighted in a study by Altermind titled: ElecLink study – ElecLink: shedding some light on a key European Project – A contribution from the academic world . 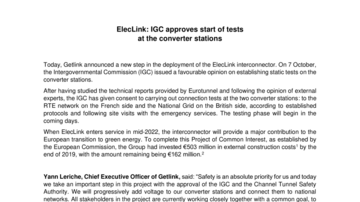 ElecLink: IGC approves start of tests at the converter stations