In line with its development policy, Eurotunnel has acquired five series 92 (“Class 92”) locomotives following a tender offer launched by Eurostar, the owner of a fleet of this type of engine.

The Class 92 locomotives are Tunnel compliant. The value of the acquisition is slightly above £2 million (equivalent to €2.9 million).

This investment demonstrates Eurotunnel’s desire to develop cross-Channel rail freight and to make the most of its know how in the sector through its subsidiary, Europorte 2.

These multi-current electric locomotives, built in the United Kingdom, between 1993 and 1996, by Brush Traction and ABB Transportation, which is now part of Bombardier, have a maximum power of 5MW (6,800 horsepower) and a top speed of 140 km/h.

“It is our firm intention to contribute to the development of cross-Channel rail freight through our subsidiary Europorte 2. We will implement, with determination and pragmatism, a project which had not previously been brought to fruition. Europorte 2 will offer a simple and efficient service to cross-Channel customers”. 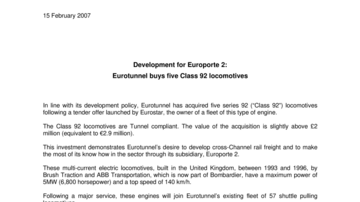