Corinne Bach joins the Board of Groupe Eurotunnel SE

Corinne Bach brings broad experience in digital industries, she replaces Robert Rochefort who has resigned from his role on the Board.

Corinne Bach will replace him for the remainder of his mandate1. The ratification of her nomination will be put to the Groupe’s Ordinary General Meeting when it meets to approve the accounts for the year ending 31 December 2016.

Corinne Bach, 42, is the Chairman and Chief Executive Officer of CanalOlympia and Vice President of Vivendi Village within the Vivendi group. She also gained experience working at SFR and NavLink, in both France and the USA. A graduate of the Ecole Polytechnique, she also holds qualifications from Imperial College, in London, the INSEAD and Telecom Paris.

The Groupe Eurotunnel Board comprises 5 female directors out of 11 (45%); the arrival of Corinne enables the Board to maintain the number of independent directors.

“On behalf of the Board, I would like to thank Robert Rochefort for his contribution to Groupe Eurotunnel and to the work of the Board over the past 12 years. His strategic vision and knowledge of the European context were important at the time of the Groupe’s safeguard and throughout its development in recent years.

I am delighted that the Board has decided to appoint Corinne Bach as his successor. Her deep understanding of the digital world and her ability to lead transformational projects will, I am sure, enable her to support the development of the Groupe”. 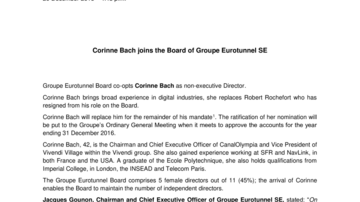 Corinne Bach joins the Board of Groupe Eurotunnel SE