Strong approval for all resolutions put to vote

Ratification of the appointment of Mrs. Corinne Bach 18% increase in dividend

The combined Annual General Meeting of Groupe Eurotunnel SE took place in Marcq-en-Barœul, France, today, Thursday 27 April 2017. The quorum of the 220,000 shareholders present or represented meant that this year reached a historical level with more than 71% of the voting shares participating.

After approving the accounts, the AGM of Groupe Eurotunnel SE voted for a dividend payment of €0.26 per share, an increase of 18% compared to last year, equivalent to a payment of €143 million, and ratified the appointment of Mrs. Corinne Bach as an independent director.

“I would like to thank all our shareholders who year after year demonstrate their interest in the life of our company and who, through the clarity of their votes and their loyalty, continue to support the Group’s long term strategy.” 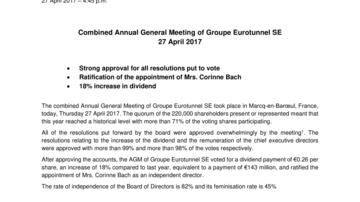