Approval of all resolutions put to vote 25% increase in dividend

The combined Annual General Meeting of Groupe Eurotunnel SA, was held in Coquelles (Pas-de-Calais) today, 29 April 2014, with 63.76% of the capital in the company represented.

All of the resolutions put forwards for vote by the Board of Directors were approved1.

The Ordinary Annual General Meeting of Groupe Eurotunnel SA, having approved the accounts, voted for the payment of a dividend of 15 euro cents per share, an increase of 25% in the dividend paid the previous year, and approved the renewal of the mandates of Mr Jacques Gounon, Mr Philippe Camu, Mrs Patricia Hewitt, Mr Robert Rochefort, Mr Philippe Vasseur and Mr Tim Yeo as Directors.

The Annual General Meeting widely welcomed the transformation of the company into a European company and the Directors remuneration policy, upon which the shareholders were consulted and which is in accordance with the Afep/Medef code.

“I would like to thank all the shareholders who, through their votes and their confidence have supported the long term strategy of the group and demonstrated their belief in the vitality of our company.” 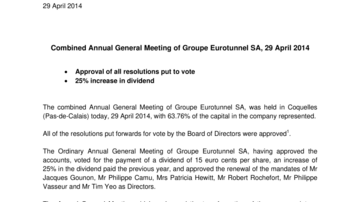