The agreement will bring new Dark Fibre and Data services to the Channel Tunnel for the first time in a generation, deploying the latest connectivity technology between the UK and mainland Europe

London, UK, 01 September 2021 - Colt Technology Services and Getlink have today announced a 25-year contract, which will see Colt install its IQ Network through the Channel Tunnel, allowing a transfer capacity of several Terabits per second per fibre pair.

This agreement will generate a minimum of €185m over the period for Getlink, with more than a third secured over the first five years. Colt will carry out the installation and entire operation of the IQ Network in accordance with the Channel Tunnel’s safety and security regulations, while Getlink will be responsible for maintenance. Colt will fully commercialise Getlink’s Channel Tunnel optic fibre and increase Getlink’s internal telecoms capacity – a unique subsea infrastructure and connectivity route that has never seen downtime.

The quality of the asset will allow the customers to benefit from span diversity.

The Colt IQ Network is a 100Gbps optimised, high bandwidth and low latency network that connects over 900 data centres and over 29,000 on net buildings globally.

The contracts for dark fibre installed in the Tunnel in 1998 will progressively expire until 2025, and Colt will take over their operation. The significant increase in bandwidth between the UK and mainland Europe will help meet the high growth in data traffic expected by 2025, making the Channel Tunnel a vital link not only for passengers and goods but also for data.

Yann Leriche, Chief Executive Officer of Getlink, stated: “The strategic location and the reliability offered by the Tunnel make our infrastructure very attractive for high-tech developments such as fibre optics. We are happy to once again leverage the Channel Tunnel asset to create the most value for our shareholders.”

Keri Gilder, Chief Executive Officer of Colt, stated: “Colt is thrilled to have entered this strategic agreement with Getlink. There is a growing demand for bandwidth between the UK and mainland Europe, which will only increase in the coming years. By running our IQ Network through the Channel Tunnel, Colt customers will benefit from reliable, low latency, high bandwidth connectivity with the option of full diversity across the entire Tunnel span.

The future potential of the Tunnel connectivity is significant, and it’s an exciting time for the wider telco industry as we continue to leverage the power of relationships to drive digital transformation and move towards the digital future.”

Getlink SE (Euronext Paris) manages, through its subsidiary Eurotunnel, the infrastructure of the Channel Tunnel and operates truck and passenger Shuttle Services (cars and coaches) between Folkestone (UK) and Calais (France). Eurotunnel is the concession holder and operator of the Channel Tunnel, the fastest, most reliable, easiest and most environmentally friendly way across the English Channel until 2086. In 26 years, more than 460 million people and more than 90 million vehicles have travelled through the Channel Tunnel. This unique land link has become a vital link between the continent and the United Kingdom. Getlink also offers a rail freight business through its subsidiary Europorte, which offers a wide range of integrated rail services, as well as an electrical interconnection through its subsidiary ElecLink. https://www.getlinkgroup.com

Colt strives to transform the way the world works through the power of connectivity – taking what’s always been in its DNA to enable customers’ success. The Colt IQ Network connects more than 900+ data centres and over 29,000 on net buildings across Europe, Asia and North America’s largest business hubs.

Colt understands today’s shifting connectivity requirements and provides agile, on-demand and secure high bandwidth networking and voice solutions to ensure enterprises can thrive. Customers include data-intensive organisations spanning over 210 cities in more than 30 countries. Colt is a recognised innovator and pioneer in Software Defined Networks (SDN) and Network Function Virtualisation (NFV). Privately owned, Colt is one of the most financially sound companies in the sector, and because of this, it’s able to put its customers’ needs at its core. For more information, please visit https://www.colt.net/ 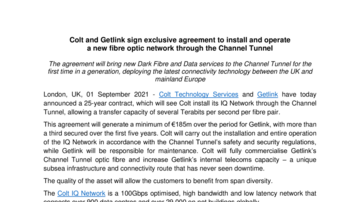