Following intrusions which caused disruption to Eurostar traffic during the night of Tuesday 1 September, Eurotunnel wishes to make clear that the intrusions took place on the public railway networks outside the Channel Tunnel concession and that Le Shuttle was not affected by this incident.

On 1 July 2015 Eurotunnel introduced a 3-point action plan which has delivered a significant reduction in the number of intrusions onto its site:

Faced with the significant strengthening of its site, the intrusions are now mostly occurring outside of the Channel Tunnel perimeter.

The SNCF-Réseau tracks at Calais-Fréthun, which are most notably used by Eurostar and rail freight trains before entering the Channel Tunnel, remain at risk from migrants endangering their lives attempting to board the trains. On Monday 31 August an agreement was reached between SNCF-Réseau and Eurotunnel during the visit to the Concession by French Prime Minister Manuel Valls and Minister for the Interior Bernard Cazeneuve. This agreement clarifies that Eurotunnel will provide its expertise to SNCF-Réseau to erect 13km of high security fencing and to carry out tree felling on the SNCF-Réseau site. The works have been identified and will begin in the days ahead. 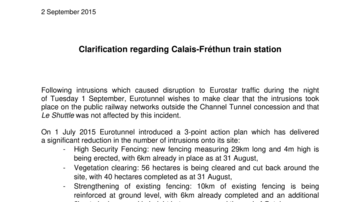