The Channel Tunnel has been recognized as the most important large scale civil engineering project in the last 100 years by FIDIC, The international federation of engineering consultants.

The international jury composed of engineers and project developers from around the world selected the longest under-sea tunnel in the world and the engineering groups SETEC and Atkins US who were the project managers, from amongst 150 candidate projects coming from all five continents and representing the most remarkable human achievements of the 20th century. The “FIDIC Century Award”, presented for the first time in 1913, was announced yesterday at a Gala event in Barcelona. The FIDIC Century Awards are considered the most important awards in the world of infrastructure.

Amongst the other candidates for the award won by the Channel Tunnel were the Tokaido Shinkanzen (the first Japanese high speed line, between Tokyo and Osaka), the Sydney Harbour Bridge and the Hoover Dam Bypass, the bridge linking the states of Arizona and Nevada.

Recognised around the world as the example for safety and punctuality, the Channel Tunnel is the only Tunnel in the world to support its own weight, that of the sea bed and the sea above. It has the advantage of many innovations, both in terms of its construction and its transportation system, which have created new standards and methodologies for the modern world. Such technological prowess inevitably required substantial investments (€15 Billion). The Railway Usage Contract (RUC) was agreed at the outset in order to ensure that the long term costs of the project would be recovered. Groupe Eurotunnel, its 3600 employees and the 320 million people who have travelled through are delighted with the worldwide recognition symbolized by the FIDIC Century Award. 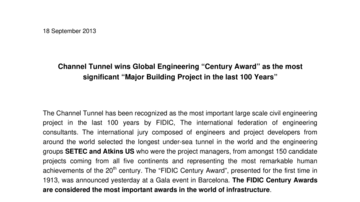