Eurotunnel is delighted that the Channel Tunnel has been recognised in a Royal Mail commemorative stamp set as part of the Queen’s Diamond Jubilee celebrations. The “Kings and Queens” stamps series was introduced in 2008 and has since then explored 600 years of the British Monarchy. It now reaches a fitting conclusion with The House of Windsor set in the year of Her Majesty The Queen’s Diamond Jubilee.

The Channel Tunnel has been selected as one of only four stamps to commemorate important milestones during the reign of the House of Windsor which was issued yesterday, Thursday 2 February 2012.

The special commemorative Channel Tunnel stamp has a face value of £1.00 and celebrates the historic linking of our two nations in May 1994 when the Channel Tunnel first began operations.

Anglo-French partnership culminated in the outstanding engineering feat that is the Channel Tunnel. In nearly 18 years, Eurotunnel has carried 284 million people and 57 million vehicles through the Tunnel, the fastest, most frequent and most environmentally-friendly transport system across the Channel.

The other significant events during the reign of the House of Windsor commemorated in this special edition of just four stamps are Scott’s expedition to the South Pole in 1912, the Second World War and England winning the 1966 Football World Cup.

“It is a great honour for us to see the Channel Tunnel on a British Stamp. This is recognition of the magnificent feat of engineering that was the building of the Channel Tunnel and of the enormous impact the Tunnel has had on travel and trade for the United Kingdom over the past 18 years”. 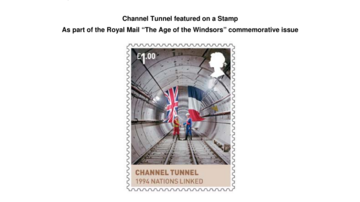