ElecLink is the joint venture, launched in 2011 by Eurotunnel and STAR Capital, to install a 500MW interconnector between France and Great Britain via the Channel Tunnel, bringing an increase of 25% on existing capacity.

This totally secure electricity transfer will enable complementarities between the two countries in terms of electricity production and consumption patterns to be optimised and will aid the development of renewable energy schemes. Using the Channel Tunnel ensures that the project itself will have a minimal impact on the environment.

At the Anglo-French Summit on 17 February 20121, the British Prime Minister and French President declared their support and encouragement for the development of ElecLink, which will strengthen the connection between the two national networks and be a further step in Anglo-French cooperation.

Angus Norman, 61, is a Chartered Engineer. He started his career with British Coal/NCB and was Plant Manager for TML for electrical equipment in the Channel Tunnel during construction, between 1988 and 1991. He was subsequently appointed Chief Electrical Engineer at Wimpey Engineering Construction. In 1992 he joined London Underground as Senior Supervising Engineer on the Jubilee Line extension Project, before moving to EDF Energy where he held several different posts, including Senior Vice President, Thermal Generation and Managing Director, Sustainable Solutions. Since 2009 he has been Chief Executive of Ocean Power Technologies. 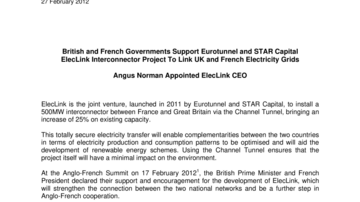