Brexit: regulatory checks for pets travelling to France are now carried out before boarding at the UK Eurotunnel terminal

Eurotunnel has opened a new space in the Victor Hugo passenger building on the UK terminal, the Pet Reception, for pets and their families before their travel to France.

Since the end of the transition period on 1 January 2021, dogs and cats travelling with their owners must prove their identity and present their vaccination passport to be admitted to the European Union. This has been the case for pets entering the UK for over 20 years.

To ensure the comfort of the large number of customers who own pets, representing 10% of Passenger Shuttle customers, Eurotunnel wanted checks to be carried out prior to departure and not upon arrival in France. To achieve this, a tripartite agreement between Getlink, the French General Directorate of Customs and Indirect Rights (DGDDI) and the French General Directorate of Food (DGAL) was signed on 1 January 2021.

The agreement stipulates that Eurotunnel’s specially trained Pet Reception staff carry out the systematic documentary checks required by the European Union, and that French Customs services based on the British terminal, may, on behalf of DGAL, carry out additional random checks and controls.

Each animal (dog, cat, ferret) must be at least 12 weeks old, hold a European Union Pet Passport or an Animal Health Certificate issued by a veterinarian approved in the United Kingdom less than 10 days before departure, and have been vaccinated against rabies after the age of 12 weeks and at least 21 days before travel.

Yann Leriche, Getlink CEO, said: “Travel restrictions have not slowed down the work and improvements carried out for the comfort and quality of service we want to offer our customers. Each year, more than 300,000 of them cross with a dog or a cat aboard our Shuttles. When traffic is back to normal, everyone will appreciate being able to go to France with their animal, with the peace of mind that they can drive straight off a Shuttle onto the motorway.” 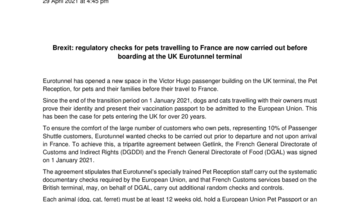 Brexit: regulatory checks for pets travelling to France are now carried out before boarding at the UK Eurotunnel terminal 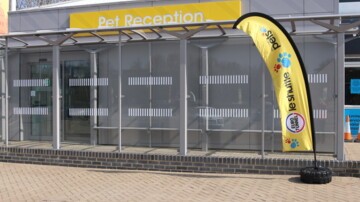 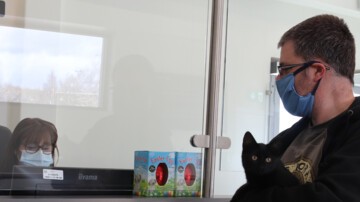 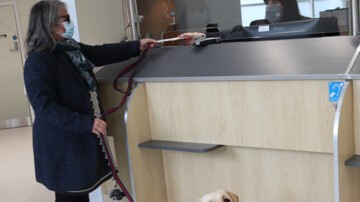