Frédéric Riga has been appointed Chief Digital Officer with effect from 6 September 2018. He will oversee the strategic alignment of information systems to the Group’s strategy for all the subsidiaries.

Frédéric Riga, 49 has a technical background (MIAGE – Master’s degree in Computer Science applied to Business Administration, from the University of Lille). He joined La Redoute in 1991 where he spent 10 years working in different IT environments. From 2001 to 2003, he went on to become Director Projects at GénériX, a software publisher, before joining Redcats, the parent company of La Redoute, where he took on a variety of roles, culminating in him being appointed Director of IT Systems and Organisation, in 2012. He remained in this role within the Cyrillus Vertbaudet Group in 2014 after the acquisition of some of Redcats’ assets. 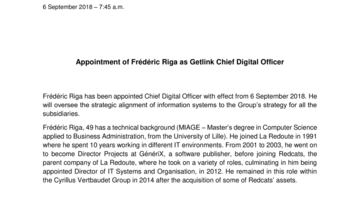