Application of European regulations to the Channel Tunnel

With several different sources announcing an imminent publication from the European Commission, for the attention of the United Kingdom and France, in relation to the application of European regulations on charges for passenger and freight trains in the Channel Tunnel, Groupe Eurotunnel SA would like to emphasise the following points of fact:

If modifications were to be made to the Concession which were unfavourable to the interests of the 300,000 small shareholders in Groupe Eurotunnel SA, the group would seek a legitimate indemnity from the states, based upon the period up to 2086, the term of the Concession. 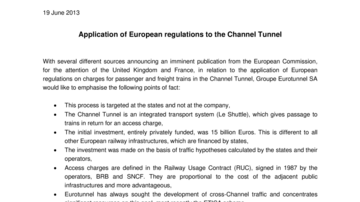 Application of European regulations to the Channel Tunnel