A graduate of ESCP Europe, Anne Laure Descleves started her career as a financial communications consultant at W & Cie (Havas), and then at Ecocom (Deloitte). In 2001, Anne-Laure Descleves joined Gameloft, the world leader in video games on smart phone or tablet, as Group Communications Manager and spokesperson, a role which she held until February 2010. In March 2010, she was appointed Human Resources Director at the head office of Gameloft. In 2011 she furthered her career with a move to PSA Peugeot Citroën as Communications Manager and spokesperson for the Aulnay factory during its closure. She worked on issues of brand protection, the process of change and management communications. Since November 2013, Anne-Laure Descleves has been Investor Relations Manager for the PSA Peugeot Citroën Group throughout its strategic capital restructuring and the arrival of the Group’s new management. 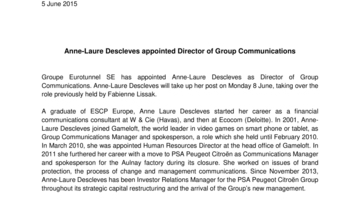