Operating profit increased by 11% to €334 million

On 17 March 2015, the Board of Directors, chaired by Jacques Gounon, finalised the accounts for the year ending 31 December 2014.

“In 2014, the 20th anniversary of the opening of the Tunnel, the Eurotunnel Group reached its objective of an operating margin of half a billion euros, one year in advance. This is the result of the strong commitment shown by our staff and of rigorous management.”

Le Shuttle broke its previous all-time record during the school holidays with a total of more than 19,000 vehicles carried in one day, on 19 December. This is the highest volume ever transported in one day in 20 years of operations.

665,400 vehicles were carried by Le Shuttle between 1 July and 31 August, an increase of 4% compared to the previous year.

Further growth in the number of passengers transported by Eurostar high-speed trains (+3%) to almost 10.4 million passengers. Eurostar has announced the opening of services to new destinations from the summer of 2015 and has ordered 17 new e320 train sets (in place of the 10 initially ordered). The sale by the UK government of its 40% shareholding in Eurostar to the Caisse de depot et placement du Quebec (CDPQ) and the British investment fund, Hermes Infrastructure, is good news, promising dynamism and giving a high value to this cross-Channel asset.

Le Shuttle has introduced a rapid and efficient system of recording vehicles on board using on board digital equipment.

As part of its constant attention to customer needs, Eurotunnel and the mobile operators, EE, O2, Vodafone UK and Bouygues Telecom have together installed a 4G network in the Tunnel. This mobile internet coverage is a major feat of technical skill: the equipment is installed 100m below sea level and Eurotunnel Shuttles travel on a high-speed rail infrastructure. 4G enables passengers to use their mobile phone or tablet anywhere in the Tunnel to listen to music, watch videos, download or share information.

Important investments are being made for the Truck Shuttle service, with the extension of the two terminals (the Terminal 2015 project) launched last year which are progressing in line with the programme. Three new Shuttles have also been ordered, a total of almost 100 wagons, which, once delivered, will increase available capacity by 20%.

A positive contribution to the growth in revenues in 2014 (€267 million, an increase of +8%), due to the signature of new and the renewal of existing contracts.

Europorte will manage operations at the Port of Verdon in Bordeaux for the next 15 years. With an existing presence in many other French ports, Europorte will bring a modal shift from road to the mass maritime transport, fluvial and rail modes in the hinterland of the port of Bordeaux.

GB Railfreight, the third largest operator in the UK, also continued to grow. It obtained a notable contract extension with a Crossrail subcontractor to transport more than a million tonnes of excavated spoil from the tunnels of the new London railway which is expected to open in 2017. The contract with Network Rail has also been renewed and extended. GB Railfreight has signed a 15-year contract with Serco for the traction of the Caledonian Sleeper.

In its decision of 9 January 2015, the Competition Appeal Tribunal ordered the Group to cease its maritime business. The Eurotunnel Group acquired three ferries from the ex-SeaFrance in June 2012 through an open and public sale of liquidated assets and then subcontracted their operation to an independent company, the SCOP SeaFrance.

Faced with the imposition of a ban on operating within six months, the Eurotunnel Group has announced its intention to seek a buyer for MyFerryLink.

MyFerryLink has won over customers – 337,564 cars and 399,453 freight units transported – through a commercial proposition that is based on quality of service. MyFerryLink reached a freight market share of 10.3% for 2014 and generated revenues of €93 million (+25% compared to 2013).

The pre-tax profit for the Eurotunnel Group for the 2014 financial year is a profit of €56 million, an increase of €26 million compared to 2013, of which €8 million is from the Fixed Link, €13 million from MyFerryLink and €5 million from Europorte.

The consolidated result after tax for the Eurotunnel Group for 2014 is a profit of €57 million, compared to €111 million in 2013 which included an exceptional tax credit of €83 million following the initial recognition of a deferred tax asset at 31 December 2013.

Business remains dynamic, led by growth in the UK economy and signs of improvement in Europe. The Group remains confident in its ability to generate sustainable growth both in cross-Channel and rail freight activities and to increase its resistance to the vagaries of the economy. The Eurotunnel Group expects growth in EBITDA (at an exchange rate of £1=€1.3 and excluding MyFerryLink) in line with the following objectives:

In the medium term, there are several factors favourable to the Eurotunnel Group: 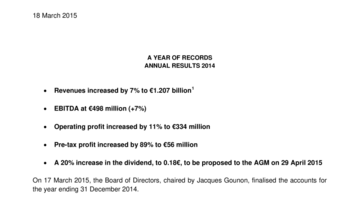