Satisfactory results in context of the Covid-19 pandemic

Yann Leriche, CEO of Getlink said: “In the first half of the year we have delivered satisfactory results given the market conditions thanks to improved cost control and the implementation of our WAYforward transformation programme, focused on customer service and operational excellence.

These have helped us to achieve a cash position of €549 million at the end of June, and to strengthen our environmental and operational advantages. The low immediate visibility therefore does not affect the underlying strength of the Group in its various businesses.”

Net financial expenses increased by €15 million for the first six months of 2021, mainly due to the effects of rising inflation rates in the UK and France on the cost of the indexed tranche of the debt.

The Group’s consolidated net result for the first six months of 2021 was a loss of €123 million.

The lack of short-term visibility does not affect the strength or long-term competitive advantages, including environmental advantages, of the Group or of its various businesses, nor their growth potential in the medium and long term.

The Group confirms its willingness to improve its financial, operational and environmental performance.

As long as the governments fail to take a stable long-term position on international travel restrictions, the Group will not be able to provide guidance on its profit trajectory. 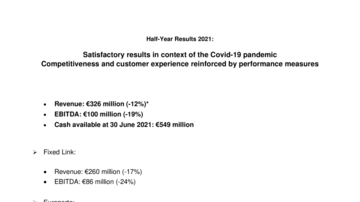