“Month after month Eurotunnel has broken traffic records, particularly for the Truck Shuttles. The Tunnel has never been as highly utilised as it is today. Despite the financial market uncertainty generated by the United Kingdom voting to leave the European Union, the Group remains confident in the performance of its economic model and in its outlook.”

The referendum on the UK leaving the European Union occurred in an international context already marked by geopolitical risk. As a result, the financial markets were hit in the days following the vote. The effects of the UK leaving the EU will depend closely on the conditions of the exit and the status that the country negotiates in relation to the EU. This uncertainty will continue until negotiations are completed, during which time the UK retains its status as a full member of the Union.

In spite of the uncertain geopolitical context the consolidated figures for the first half-year show an increase of €9 million in EBITDA to €249 million.

Operating costs for the Group are almost stable (+1%) for the period. For the Fixed Link, operating costs increased by 5% to €204 million, an increase due to the growth in activities and to additional costs generated by the strengthening of security measures.

For the Fixed Link, this is the seventh consecutive first-half-year of EBITDA growth.

Revenues and the operating result are, as always, characterised by a high level of seasonality across the year.

Net financial charges have increased slightly (+€2 million) over the first six months of 2016, the reduction in financial charges following the operation to simplify the structure of the debt and debt repayments being offset by the impact of the increase in the UK inflation rate on the indexed tranche of debt.

In the first half of 2016, the Group recorded a consolidated net profit of €60 million, an increase of €29 million compared to the first half of 2015 (recalculated), after taking account of the €22 million net profit from the discontinued maritime segment, which arises mainly from the accounting for the finance leases with options to sell of the ferries.

As the mechanisms for and the means by which the UK will leave the European Union have yet to be determined, it is difficult to predict the effect on the macro economic and political environment and therefore on cross -Channel transport and the Group’s activities. Nonetheless, the Group does not expect any significant impact on its activities in the short term and currently activity remains buoyant.

In this context, the Group remains confident in its capacity to generate sustainable growth and continues to forecast growth in EBITDA, with the following objectives: 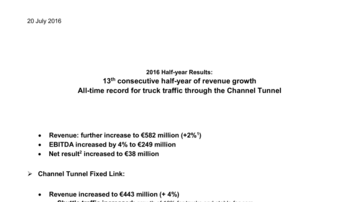