On 17 February 2016, the Board of Directors, chaired by Jacques Gounon, finalised the accounts for the year ending 31 December 2015.

“In a difficult environment in 2015, the Group worked with the efficiency of a private company to deliver a genuine public service. This was achieved through the commitment of its staff, close cooperation with the two governments and an exemplary capacity to react to events.”

Following the decision by the Competition Appeal Tribunal on 9 January 2015 (confirmed by the Supreme Court on 16 December 2015), concerning the ban on operations from Dover for MyFerryLink ships after 9 July 2015, the Group was obliged to withdraw from its maritime activity.

The two ships Rodin and Berlioz are now leased to DFDS.

Since MyFerryLink is treated as a discontinued activity, only its net result (- €7 million) is included in the consolidated accounts.

Having obtained authorisation from both national and European regulators to operate a private electrical interconnector between the UK and France, preferred bidder status has been awarded to suppliers for the construction of the two converter stations and for the manufacture and installation of the cable through the Tunnel.

Consolidated EBITDA reached €542 million, an increase of €3 million compared to 2014 at a constant exchange rate. The security of the Fixed Link being the responsibility of the two governments, a claim for €29 million has been made via the Intergovernmental Commission, to compensate essentially the revenue losses due to migrant pressure. No revenue relating to this claim has been accounted for in 2015.

The Group’s pre-tax profit from continuing operations for 2015 was €115 million, an improvement of €25 million compared to 2014.

Business remains dynamic, led by growth in the UK economy and signs of improvement in Europe. Despite an uncertain global environment, the Group remains confident in its ability to generate sustainable growth both in cross-Channel and rail freight activities and to increase its resistance to the vagaries of the economy. The Eurotunnel Group expects growth in its EBITDA (at a constant exchange rate of £1=€1.375) in line with the following objectives:

In the medium term, there are several factors favourable to the Eurotunnel Group:

Get the full results in the attached document below 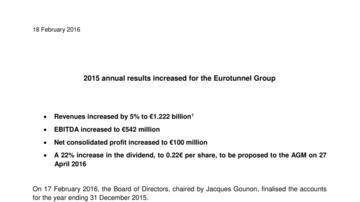