At its meeting on Wednesday 29 February 2012, the board of directors, chaired by Jacques Gounon, finalised the accounts for the year ended 31 December 2011.

“In 2011, the Eurotunnel Group made a clear profit and generated significant cash flows despite the uncertain economic climate. The outlook is positive and, as a sign of our confidence in the future, we will ask the shareholders to vote at the AGM for the doubling of the dividend to €0.08 for the 2011 financial year.”

IMPORTANT EVENTS IN THE PAST YEAR

Following the conversion of the 2007 Warrants4 which enabled shareholders to benefit from the increase in value achieved within the Eurotunnel Group and the various transactions to simplify its financial structure, Groupe Eurotunnel SA has a capital composed of 561 million shares compared to maximum of 613 million projected in 2007. Since the financial restructuring in 2007 and following the final exercise of the 2007 Warrants the combined effect of the transactions completed has led to an increase in value of almost 9%.

Groupe Eurotunnel SA has taken advantage of its significant cash reserves to optimise the management of its debt, by buying €147 million of discounted notes. This represents a full-year reduction in interest charges estimated at €5 million in 2012. The nominal value of the long term debt less the floating rate notes is €3.6 billion. The long term debt to asset ratio is 56.4%.

In 2011 almost 19 million people and approximately 17.7 million tonnes of freight crossed the Channel using the Tunnel.

Eurotunnel  won  the  IFW  Environment  Award,  for  Leadership  in  Sustainable

2% increase in the number of Eurostar passengers to nearly 9.7 million in 2011.

Commissioning of four SAFE stations (fire suppression zones), a major innovation to further strengthen the safety of the Channel Tunnel.

GB Railfreight, the UK subsidiary of Europorte and third largest rail freight operator in the UK, won the top prize for Freight and Logistics at Rail Magazine’s National Rail Awards 2011.

A positive contribution to 2011 revenues (€158 million). Europorte’s offer is based on punctuality and quality of service, which ensured the continuation of all existing contracts for Europorte France and the signing of new contracts, notably with leading European transport and logistics operator GEFCO.

Acquisition of 28 locomotives, notably the Vossloh Euro 4000 diesel-electrics, currently the most powerful in Europe.

The recruitment of c.100 drivers in France as part of the strategy to develop sustainable freight transport and to generate skilled jobs.

This is the first time that a privately owned transport group has created such a training centre, open to all European railway and infrastructure maintenance companies and their subcontractors, as well as those from neighbouring countries. CIFFCO is accredited by the French Public Safety authority (EPSF) and delivers courses for fifteen different skills. It is able to provide training for technicians working on the French national network as well as those of neighbouring countries.

In 2011, the available cash flow enabled the payment of a dividend (€21 million), the purchase of variable rate notes issued by Channel Link Enterprises Finance (CLEF, the debt securitisation structure), for €128 million, the purchase of own shares (€40 million) and capital expenditure of €98 million. At 31 December 2011, cash and cash equivalents amounted to €276 million.

The Queen’s Jubilee in June 2012: bookings taken for this long weekend are already on the increase. The number of booths available will be more than doubled to ease passport controls and improve speed and traffic flow, always an objective of the business.

London 2012 Olympic Games: the Eurotunnel Group is preparing itself to manage the waves of passengers and will speed up Shuttle crossing times to just 30 minutes, instead of the normal 35 minutes. Shuttle speed will be increased to 100 mph compared to 90 mph today.

The upturn in activity appears to be continuing, but will remain gradual according to the segment. In the medium term, the Group remains confident in its ability to generate sustainable growth and, through the development of its different vectors for growth, to improve its resistance and responsiveness to the vagaries of the economy.

Eurotunnel maintains its interest in the purchase of the three ex-Seafrance ferries. The Group is organising the resources necessary to develop this new activity in line with its criteria for profitability and for the benefit of the Nord-Pas-de-Calais region.

Get the full results in the attached document 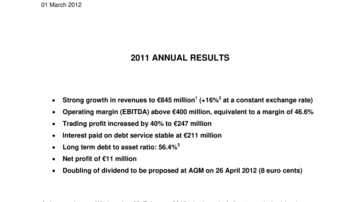